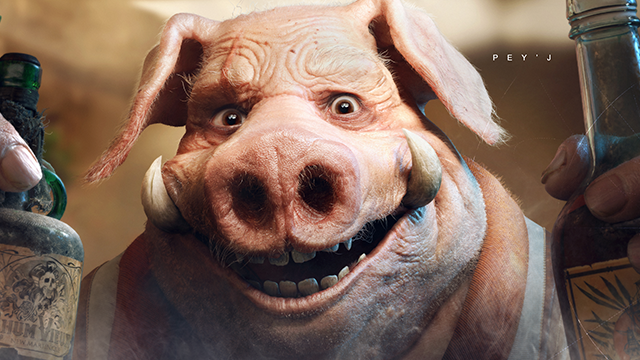 At least, that’s how it feels. After last week’s rough earnings call and the cancellations of several unannounced games, Ubisoft has insisted that Beyond Good & Evil 2 is still coming even though it’s been years since we saw hide or hair of it. More than the overuse of its open world formula, more than the annoying proliferation of Rabbids, more than CEO Yves Guillemot refusing to take responsibility for the company’s failings, there is no more quintessentially Ubisoft behavior than saying the words “Beyond Good & Evil 2 is still in development.”

May 2008: BG&E and Rayman creator Michel Ancel tells JeuxVideo that he has been in pre-production on Beyond Good & Evil 2 for a year, with a team of 10-12 developers, but the game has not yet been greenlit. This appears to be a tease for a planned impending announcement.

May 28, 2008: The Ubidays 2008 event includes a trailer for an untitled game showing off an impressive new game engine. The footage includes Pey’j and Jade from Beyond Good & Evil, and is clearly Ancel’s in-the-works sequel. It is the first of only two looks we get at this iteration of Beyond Good & Evil 2.

April 2009: Michel Ancel says that BG&E 2 will be a direct sequel, and is inspired by the climate of fear created after 9/11 (opens in new tab).

July 2009: In an interview (opens in new tab), Ubisoft North America president Laurent Detoc confirms the footage was genuine, but also offers the perplexing comment: “Well, I didn’t say there’s definitely going to be another game. I said something had leaked, which means we’ve been working on some Beyond Good and Evil stuff, but whether there’s going to be another game or not, that’s something for the future.” Was BG&E 2 actually greenlit?

January 2010: Aha! Contrary to a rumor that the game was on hold, Ubisoft managing director Geoffroy Sardin says Beyond Good & Evil 2 is still in production (opens in new tab).

June 2011: Ancel tells Eurogamer he took a break from BG&E 2 to work on Rayman Origins, but development continues, and he intimates that it might not be able to run on current-gen consoles (the Xbox 360 and PS3).

November 2011: Michel Ancel says BG&E 2 is in an “active creation stage” in a video interview (opens in new tab). He says they can’t commit to a 2013 release and will need more advanced technology to run the game.

September 2012: Ancel says that Beyond Good & Evil 2 has been dormant (opens in new tab) while the team worked on Rayman, but that they’re ready to switch back.

November 2012: Guillemot tells Polygon (opens in new tab) (which did not exist the first time Ubisoft insisted Beyond Good & Evil 2 was still in development): “It’s really a game that we’ve been working, we have worked on, and is a game that we want to do. But there are so many things that have to be done that, you know, this one is going to come in line at one point, but at the moment Michel is really on Rayman Legends.”

February 2013: Despite commenting on Beyond Good & Evil 2 three months prior, Yves Guillemot tells Kotaku (opens in new tab): “I don’t give comments anymore on BG&E2, because I think … the next time we communicate we have to have something new.” He also says: “It’s coming.”

July 2013: “Now that we have the [new] consoles around the corner we’re working on them… Beyond Good & Evil is a project I always have in mind and I hope good things will come for this project very soon,” Ancel says (opens in new tab).

July 2014: Michel Ancel creates his own indie studio, but Ubisoft claims he’s still an employee, splitting his time between the two companies. The publisher then tells Eurogamer (opens in new tab) that Ancel is working on “an extremely ambitious new title that is very close to his and the team’s heart,” which it then confirms is indeed Beyond Good & Evil 2.

June 2015: Showing hitherto rare restraint when asked if BG&E2 was still in development, Yves Guillemot says (opens in new tab), “I can’t say the name, but there is a team working with Michel Ancel on a project that is… very interesting. It’s a game I’m sure you will like very much, and we can’t say more.”

September 2016: Michel Ancel posts concept art (opens in new tab) from BG&E2 without naming it as such.

October 2016: Ubisoft posts on the Beyond Good & Evil Facebook page that it is “delighted to confirm that Michel Ancel is currently working with the Ubisoft Montpellier Studio on a new Beyond Good & Evil game.” It has been eight and a half years at this point.

June 2017: A few days after the reveal, Ancel explains (opens in new tab) that BG&E 2 is at “day zero of development,” which will be done with community input.

June 2018: Another E3 trailer (opens in new tab) teases the return of protagonist Jade, despite this being a prequel.

June 2018: Ancel says the dev team is aiming for (opens in new tab) a playable beta for the end of 2019. It will not materialize.

May 2019: Ubisoft preemptively says (opens in new tab) BG&E2 won’t be at E3 this year, but says the updates will keep coming.

September 2020: Michel Ancel is accused of toxic mismanagement among the other allegations of workplace abuse and toxicity at Ubisoft. He leaves the company (opens in new tab), but Ubisoft says he has not been directly involved in BG&E2 development for some time. The most recent post on the official Twitter account is announcing his departure.

August 2022: BG&E 2 gets a new lead writer (opens in new tab). Ubisoft says: “The development team is hard at work to deliver on the promise made to its community.”

November 2022: Insider Gaming claims (opens in new tab) that BG&E 2 is in “early development,” and likely rebooted since it was shown in 2018. Ubisoft responds by simply saying development is still underway.

January 2023: Ubisoft confirms (opens in new tab) that Beyond Good & Evil 2 has not been canceled. It is, as it always has been, still in development.

How High Is The Crypto Fear? New Survey Shows That 72% Of Institutional Traders Are Skeptical Of Digital Assets In 2023