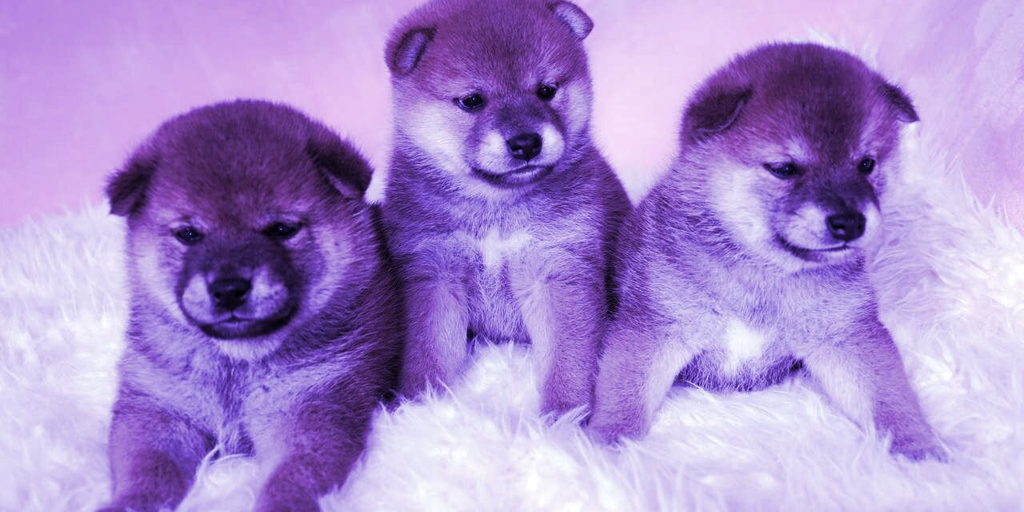 To say dog-themed cryptocurrencies are popular is a bit of an understatement—in terms of just how prevalent they’ve become ever since Tesla founder Elon Musk first tweeted about Dogecoin in 2019.

The now-owner of Twitter famously said, “Dogecoin might be my fav cryptocurrency.” Years later, hundreds of dog-themed tokens are now vying for similar attention.

As one Reddit user recently pointed out, nearly all of the top 10 tokens under CoinGecko’s so-called meme section make some reference to man’s best friend, whether that’s coins like Dogelon Mars or Doge Killer.

Dogecoin might be my fav cryptocurrency. It’s pretty cool.

While Dogecoin and Shiba Inu are undoubtedly leaders in this category, the recent rise and fall of Solana-based Bonk Inu (BONK) has captivated many crypto traders, accompanied by a line of BONK NFTs and kicking off a surge in the price of Solana itself.

Even though BONK launched on Dec. 25, the three tokens—DOGE, SHIB, and BONK—have accounted for around $25.6 billion in trading volume over the past month, according to data from CoinGecko. By comparison, Bitcoin has accounted for $618.7 billion worth of trading volume.

For the time being, Dogecoin remains the top dog among a cadre of canine-themed coins, with $17.5 billion in trading volume over the past month compared to $7.2 billion for Shiba Inu and $885 million for BONK since launch.

It’s hard to say whether any meme token will ever come close to Dogecoin’s meteoric rise of reaching 73 cents, a price it achieved in May of 2021 just before Musk made an appearance on the comedic television show Saturday Night Live, where he called the coin a “hustle,” and Dogecoin then plummeted 20% in a single hour.

Yet, many tokens out there seek to emulate Dogecoin by leaning heavily on the token’s name. There are at least 169 cryptocurrencies tracked by CoinGecko that include some variation of Doge in their name, and they have seen over $323 million in trading volume in the past month.

While it did not draw inspiration directly from the token’s name, Shiba Inu is an Ethereum-based riff on Dogecoin that launched in 2020, adopting the same dog breed as Dogecoin as the network’s mascot and moniker. This leads to Bonk Inu, itself a riff on Shiba Inu, but built on Solana, a network designed to compete with Ethereum.

One of the key differences between Bonk Inu and Shiba Inu compared to their Musk-touted predecessor is that the two newer tokens operate on existing proof-of-stake networks. But Dogecoin, like Bitcoin, is a proof-of-work cryptocurrency that is mined and operates on its own blockchain.

Shiba Inu also has its fair share of copycats, with 112 coins mentioning Shiba in their name, which saw over $224 million in trading volume over the past month.

Over the past day, Shiba Inu’s price had risen 6.1% to $0.00001137 as of this writing, following an announcement from the coin’s development team that a layer-2 upgrade would soon launch and implement a burn mechanism, among other improvements.

Even the creation of Bonk, which also recently announced a token burn, has spawned a handful of imposters so far, such as Dogebonk, Shibonk, and Catbonk. Five coins that contain Bonk in their name have totaled around $253 million in trading volume since the token launched, according to data from CoinGecko.

Many of these copycat coins are even more volatile than the meme tokens they’re based on or could be outright scams. On Tuesday, blockchain security firm PeckShiled alerted that a copy of BONK built on Ethereum sidechain Polygon had plunged nearly 97% out of the blue.

Stay on top of crypto news, get daily updates in your inbox.