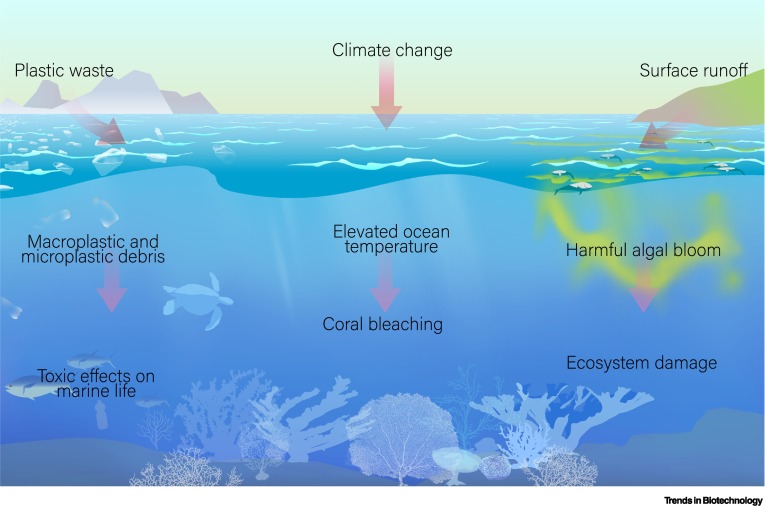 an illness in humans caused by domoic acid exposure through ingestion of contaminated seafood that causes excitotoxic brain damage and organ failure in mammals, including humans.

plastics that can be broken down by the action of living organisms, usually microbes, producing biomass, water, and carbon dioxide as products.

the biological conversion of an organic chemical or contaminant into a metabolite that can be utilized by natural metabolic processes.

a functional category of proteins or protein complexes that assist in a cell’s protein folding functions.

a process in which the coral–algal symbiosis collapses, resulting in expulsion of the algae from the coral host. The corals become energy starved and are at risk of death. The bleaching effect is due to the loss of the algae, which provides the color to many coral species.

biosensors that use CRISPR enzymes to recognize nucleic acid sequences and produce an output signal. The enzymes currently in use include Cas12a for dsDNA detection and Cas13a for RNA detection.

an optimization method in which variations of a biomolecule of interest are generated and subjected to a selection scheme. Desired ‘improved’ variants are selected and then used to seed subsequent cycles of variant generation and selection. In this way, a path can be traced along the fitness landscape to obtain optimized versions of the parent molecule.

a small-molecule neurotoxin produced by some species of algae, most notably Pseudo-nitzschia australis and Chondria armata. It enters the food chain through contaminated shellfish and small fish that feed off the algae and bioaccumulates in higher trophic levels.

the bioengineering of ecosystems, with the goal of maintaining or restoring the health of a niche or general biome.

an influx of nutrients and/or minerals into a body of water which affects the natural ecosystem. Usually caused by sewage discharge, industrial waste dumping, or fertilizer runoff from farms.

a synthetically derived RNA that binds to a CRISPR enzyme to program its sequence specificity.

an explosive overgrowth of unicellular algae populations in a localized area, caused by favorable nutrient conditions, warm waters, and certain weather conditions. The resulting bloom and decomposition of dying algae cause hypoxic zones, which can kill fish and other organisms in the area.

a highly conserved family of chaperone proteins that have evolved to play key roles in maintaining proper protein folding.

an ecological unit composed of the entire aggregate network of an organism, including the host and any mutualistic partners, colonizing protists, microbes, fungi, or viruses.

the contingent of microorganisms that colonize a host organism and may consist of bacteria, archaebacteria, fungi, and viruses.

fragments of plastic waste less than 5 mm in size. Microplastics can readily contaminate food chains and permeate throughout the ecosystem.

polyethylene terephthalate, colloquially known as polyester. PET is one of the most widely used plastics in the world and is highly recyclable.

an esterase class of enzymes that efficiently catalyze the hydrolysis of polyethylene terephthalate (PET) plastics to monomeric mono-2-hydroxyethyl terephthalate (MHET).

the ability of an organism to survive changes in temperature.

unicellular photosynthetic dinoflagellates known to serve as endosymbionts to a wide range of marine invertebrate organisms.