How to Transition to Manifest V3 for Chrome Extensions 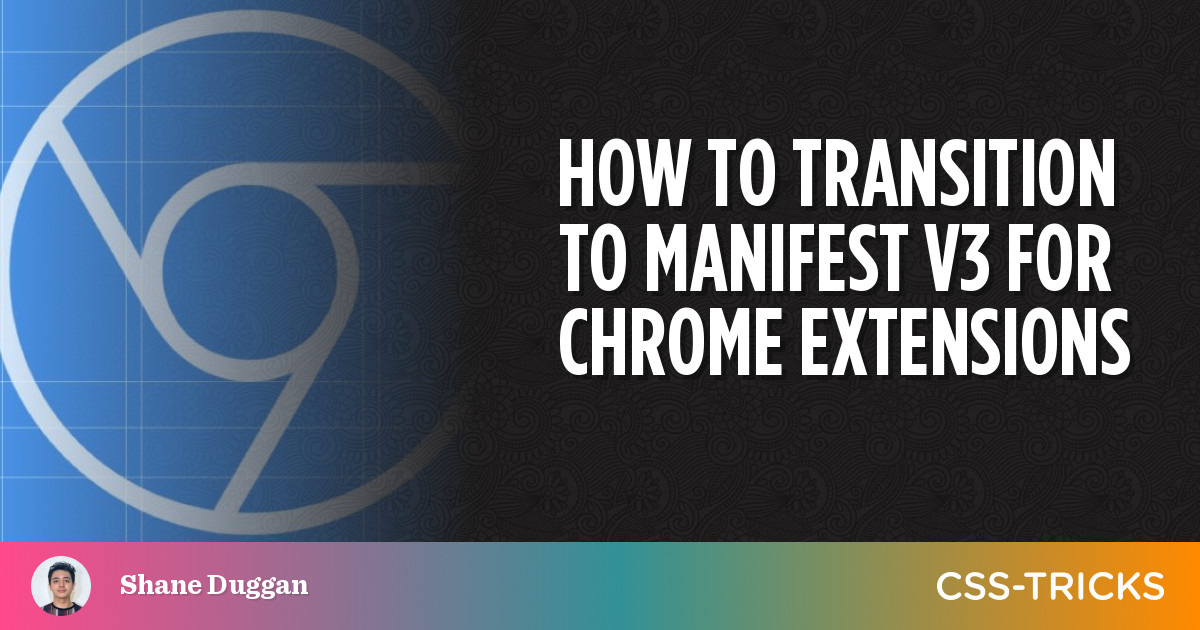 While I am not a regular Chrome extension programmer, I have certainly coded enough extensions and have a wide enough web development portfolio to know my way around the task. However, just recently, I had a client reject one of my extensions as I received feedback that my extension was “outdated”.

As I was scrambling to figure out what was wrong, I swept my embarrassment under the carpet and immediately began my deep dive back into the world of Chrome Extensions. Unfortunately, information on Manifest V3 was scarce and it was difficult for me to understand quickly what this transition was all about.

Needless to say, with a pending job, I had to painstakingly navigate my way around Google’s Chrome Developer Documentation and figure things out for myself. While I got the job done, I did not want my knowledge and research in this area to go to waste and decided to share what I wish I could have had easy access to in my learning journey.

Why the transition to Manifest 3 is important

Manifest V3 is an API that Google will use in its Chrome browser. It is the successor to the current API, Manifest V2, and governs how Chrome extensions interact with the browser. Manifest V3 introduces significant changes to the rules for extensions, some of which will be the new mainstay from V2 we were used to.

The transition to Manifest V3 can be summarized as such:

One of the main goals of Manifest V3 is to make users safer and improve the overall browser experience. Previously, many browser extensions relied on code in the cloud, meaning it could be difficult to assess whether an extension was risky. Manifest V3 aims to address this by requiring extensions to contain all the code they will run, allowing Google to scan them and detect potential risks. It also forces extensions to request permission from Google for the changes they can implement on the browser.

Staying up-to-date with Google’s transition to Manifest V3 is important because it introduces new rules for extensions that aim to improve user safety and the overall browser experience, and extensions that do not comply with these rules will eventually be removed from the Chrome Web Store.

In short, all of your hard work in creating extensions that used Manifest V2 could be for naught if you do not make this transition in the coming months.

The key differences between Manifest V2 and V3

There are many differences between the two, and while I highly recommend that you read up on Chrome’s “Migrating to Manifest V3” guide, here is a short and sweet summary of key points:

If you find some of the tags above seem foreign to you, keep reading to find out exactly what you need to know.

How to smoothly transition to Manifest V3

I have summarized the transition to Manifest V3 in four key areas. Of course, while there are many bells and whistles in the new Manifest V3 that need to be implemented from the old Manifest V2, implementing changes in these four areas will get your Chrome Extension well on the right track for the eventual transition.

The four key areas are:

With these four areas, your Manifest’s fundamentals will be ready for the transition to Manifest V3. Let’s look at each of these key aspects in detail and see how we can work towards future-proofing your Chrome Extension from this transition.

Updating your manifest’s basic structure is the first step in transitioning to Manifest V3. The most important change you will need to make is changing the value of the "manifest_version" element to 3, which determines that you are using the Manifest V3 feature set.

One of the major differences between Manifest V2 and V3 is the replacement of background pages with a single extension service worker in Manifest V3. You will need to register the service worker under the "background" field, using the "service_worker" key and specify a single JavaScript file. Even though Manifest V3 does not support multiple background scripts, you can optionally declare the service worker as an ES Module by specifying "type": "module", which allows you to import further code.

Overall, updating your manifest’s basic structure is a crucial step in the process of transitioning to Manifest V3, as it allows you to take advantage of the new features and changes introduced in this version of the API.

Here is an example of how to modify your host permissions:

In order to update the CSP of your Manifest V2 extension to be compliant with Manifest V3, you will need to make some changes to your manifest file. In Manifest V2, the CSP was specified as a string in the "content_security_policy" field of the manifest.

You should also remove any references to external domains in the "script-src", "worker-src", "object-src", and "style-src" directives if they are present. It is important to make these updates to your CSP in order to ensure the security and stability of your extension in Manifest V3.

To use this new API, you will need to specify the declarativeNetRequest permission in your manifest and update your code to use the new API. One key difference between the two APIs is that the declarativeNetRequest API requires you to specify a list of predetermined addresses to block, rather than being able to block entire categories of HTTP requests as you could with the chrome.webRequest API.

It is important to make these changes in your code to ensure that your extension continues to function properly under Manifest V3. Here is an example of how you would modify your manifest to use the declarativeNetRequest API in Manifest V3:

You will also need to update your extension code to use the declarativeNetRequest API instead of the chrome.webRequest API.

Other aspects you need to check

What I have covered is just the tip of the iceberg. Of course, if I wanted to cover everything, I could be here for days and there would be no point in having Google’s Chrome Developers guides. While what I covered will have you future-proofed enough to arm your Chrome extensions in this transition, here are some other things you might want to look at to ensure your extensions are functioning at the top of their game.

Feel free to take some time to get yourself up to date on all the changes. After all, this change is inevitable and if you do not want your Manifest V2 extensions to be lost due to avoiding this transition, then spend some time arming yourself with the necessary knowledge.

On the other hand, if you are new to programming Chrome extensions and looking to get started, a great way to go about it is to dive into the world of Chrome’s Web Developer tools. I did so through a course on Linkedin Learning, which got me up to speed pretty quickly. Once you have that base knowledge, come back to this article and translate what you know to Manifest V3!

So, how will I be using the features in the new Manifest V3 going forward?

Well, to me, the transition to Manifest V3 and the removal of the chrome.webRequest API seems to be shifting extensions away from data-centric use cases (such as ad blockers) to more functional and application-based uses. I have been staying away from application development lately as it can get quite resource-intensive at times. However, this shift might be what brings me back!

The rise of AI tools in recent times, many with available-to-use APIs, has sparked tons of new and fresh SaaS applications. Personally, I think that it’s coming at a perfect time with the shift to more application-based Chrome extensions! While many of the older extensions may be wiped out from this transition, plenty of new ones built around novel SaaS ideas will come to take their place.

Hence, this is an exciting update to hop on and revamp old extensions or build new ones! Personally, I see many possibilities in using APIs that involve AI being used in extensions to enhance a user’s browsing experience. But that’s really just the tip of the iceberg. If you’re looking to really get into things with your own professional extensions or reaching out to companies to build/update extensions for them, I would recommend upgrading your Gmail account for the benefits it gives in collaborating, developing, and publishing extensions to the Chrome Web Store.

However, remember that every developer’s requirements are different, so learn what you need to keep your current extensions afloat, or your new ones going!