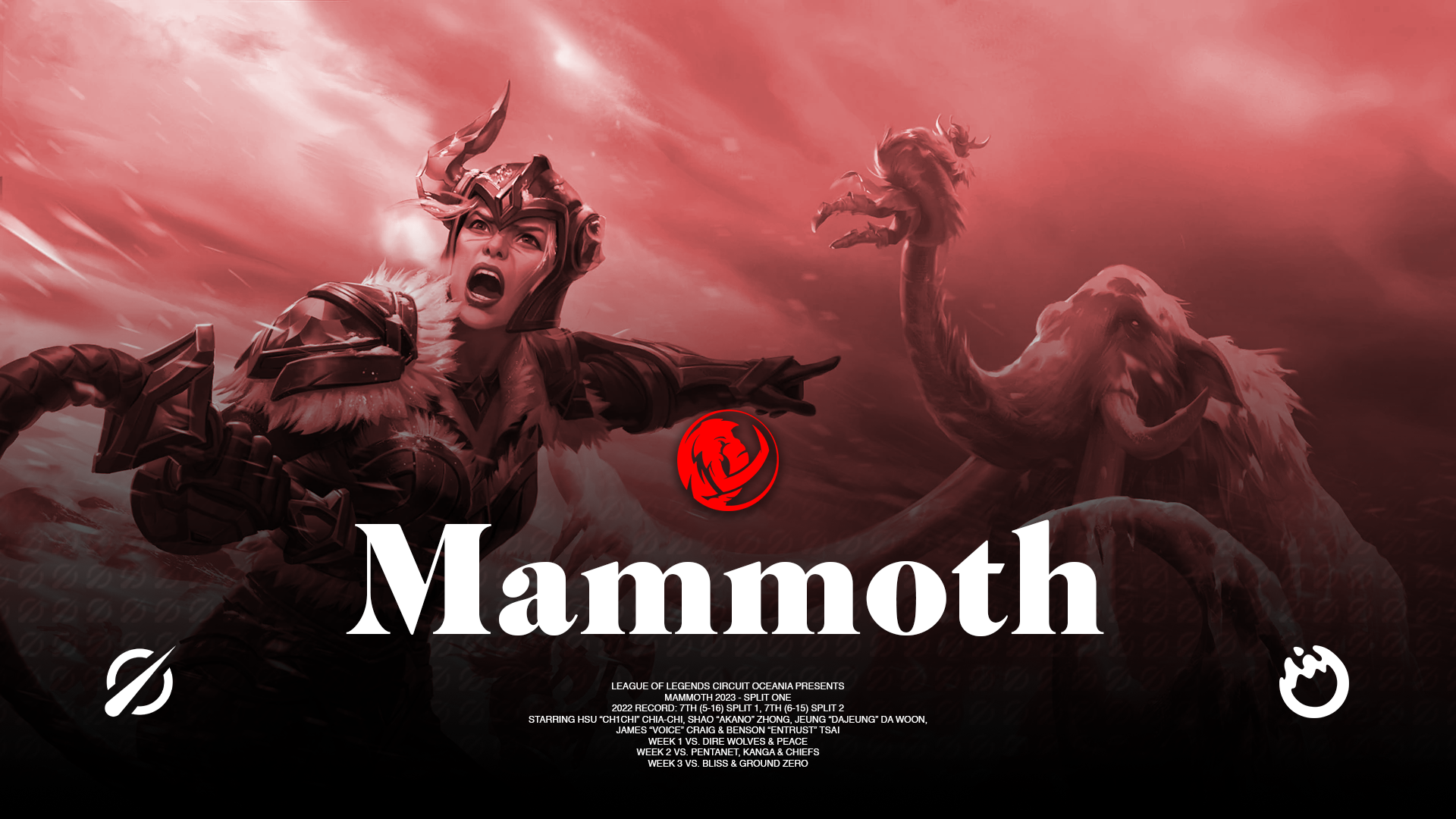 LCO Split 1 2023 is just four sleeps away, and as the last of this years’ squads make their final announcements, many pundits begin speculating as to where they believe each team will end up by split’s end.

And with Gravitas making their exit following Split 2 last year, eyes turn to perennial cellar-dwellers Mammoth as favourites for the bottom spot.

It wasn’t always the case, though.

2019, Split 2 — what feels like an age ago — and Mammoth were far from the wooden spoon. With future LCS exports Ibrahim “Fudge” Allami, Calvin “k1ng” Truong and Mitchell “Destiny” Shaw combining, Mammoth were about to flip the script.

The squad blitzed through Split 2, finishing 16-5, before sweeping both Order and Chiefs 3-0 to claim a Worlds berth — where they’d go as far as the Play-In tiebreaker.

A lot has changed, and not much has gone Mammoth’s way ever since that Worlds appearance. Losing their star trio to North America would prove costly, with the organisation unable to replicate any such result ever since.

Mammoth were saved of bottom spot throughout 2022 by a combined 3-39 Gravitas, but with just 11 wins from the last two splits, the team will need to be bringing their absolute best if they want to buck the trend.

Bot laner James “Voice” Craig and substitute Benny “District 1” Nguyen are the only returning members of Mammoth ’22, with District 1 once again on the pine for the squad this split.

Mammoth has instead opted to pick up three former Gravitas players for 2023. Jungler Shao “Akano” Zhong makes a return to a starting LCO roster for the first time since 2021, having spent 2022 benched at Gravitas.

The final piece to Mammoth’s squad is newcomer Hsu “Ch1Chi” Chia-Chi, who will debut in the LCO as MEC’s top laner.

Mammoth have already knocked the announcement video out of the park, but the question remains: can they replicate their content team’s efforts on the Rift?

They’ll open their 2023 account against Dire Wolves on Monday night, before taking on the enigmatic Peace roster to wrap week one. Assuming scheduling holds, Mammoth will need to go through both LCO newcomers Bliss and Ground Zero in their final week to make a push for playoffs.

Pundit predictions and previous roster history aside, Mammoth’s fate remains squarely in their own hands, and they’ll be out to prove everyone wrong in 2023.

The 2023 LCO Split 1 approaches, and before it all kicks off Snowball Esports will introduce each and every time ahead of the season opener. Follow Snowball Esports for the up to date details and predictions as season 2023 begins.