Hey everyone! This is Ian from Drinkbox Studios on the first-year anniversary of Nobody Saves the World. It’s hard to believe so much time has passed already, and we’ve been blown away by the response to the game. To celebrate the occasion, we’ve released a free update – the Impossible Dungeon!

As you might expect, the update adds an infinitely-replayable dungeon called the Impossible Dungeon. What you might not expect is that it is part of a carnival run by the crass, moon-headed Jimmy Luna Jr. Inside the Impossible Dungeon tent lies an endless barrage of challenges that will push your skills and customizations to the limit.

The further you make it into the Impossible Dungeon the more difficult it becomes and the more carnival tickets you earn. Tickets are spent crafting pieces of a giant statue to commemorate your favourite forms. Go in solo or bring a friend with you to rack up tickets and build the ultimate statue!

There are other prizes to earn in the Infinite Dungeon, like the new Dino form. The Dino is a fun powerhouse that makes it easy to pick up and smash baddies, and its Evolution ability gives you an extra damage boost when you vary your attacks. Like all new forms, this adds even more moves to the game that can be mixed and matched to make the perfect build.

Finally, as of today, the game is exiting Microsoft Game Pass. On behalf of everyone at Drinkbox, I want to extend a HUGE thank-you to all who downloaded and played the game. Nobody Saves the World is currently on sale for 40% off, so it’s a great time to grab it if you aren’t ready for the fun to end.

One last time, thank you for playing Nobody Saves the World! We hope you have a blast with the Impossible Dungeon! 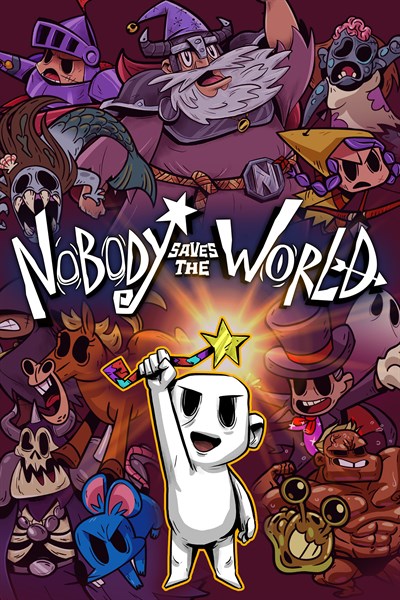 Nobody Saves the World

☆☆☆☆☆ 217
★★★★★
$24.99 $14.99
Xbox One X Enhanced
Transform from a featureless nobody into a SLUG, a GHOST, a DRAGON, and MORE in this new take on Action RPGs from the creators of Guacamelee! Complete quests to discover and swap between 15+ varied and distinct Forms. Mix and match abilities in unexpected ways to unlock and complete even MORE challenging quests. Explore a vast overworld – on your own or with a friend online – while clearing shape-shifting dungeons in an effort to stop The Calamity and SAVE THE WORLD!