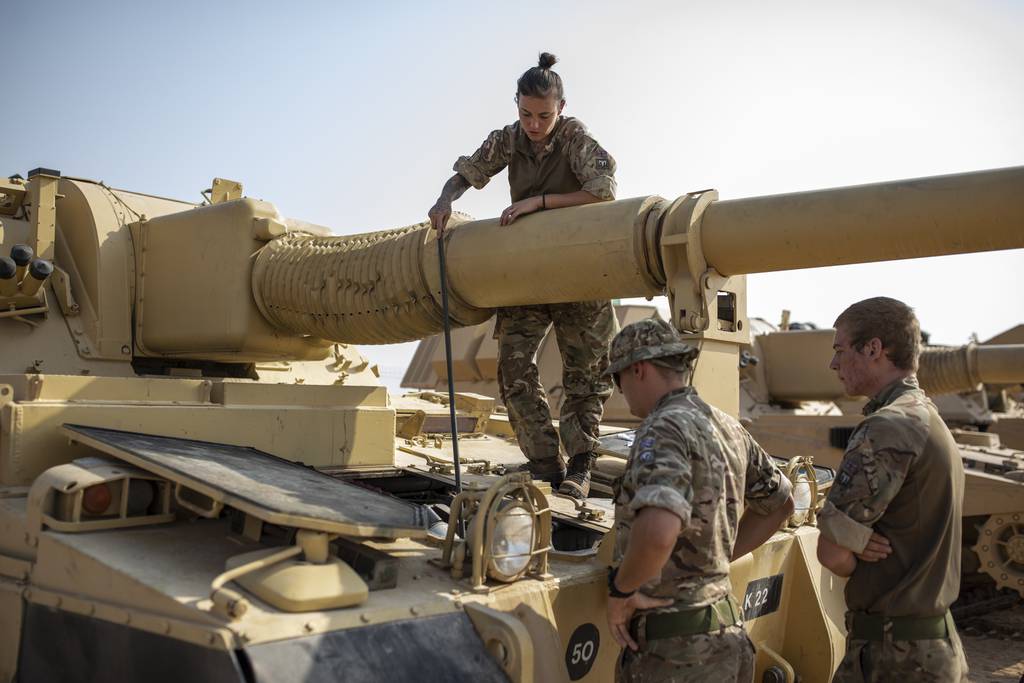 LONDON — Britain is accelerating a program to update Army artillery capabilities in response to lessons learned from the conflict in Ukraine.

The move is meant to field a new 155-millimeter howitzer in the British Army’s Mobile Fires Platform program during this decade rather than in the 2030s, Defense Secretary Ben Wallace told lawmakers on Jan. 16. It also involves buying a gap-filler weapon until such time, he said.

Under the existing program schedule a new artillery capability to replace the British AS-90 weapon was scheduled to be available in 2029, with a full operating capability in 2032.

New target dates for the weapon have yet to be made public. And officials here did not say how the government will go about urgently acquiring an interim solution.

The MoD declined to comment beyond repeating Wallace’s comments to Parliament.

Donation of Army’s AS-90 artillery, along with Challenger 2 main battle tanks, are at the center of a new military aid package for Ukraine, described by Wallace as Britain’s biggest donation yet.

Pressure to rethink the timetable for introduction of new artillery capability has been mounting for a while.

Even before Moscow’s invasion of Ukraine land warfare analyst Ben Barry of the International Institute for Strategic Studies produced studies detailing how the British would be heavily outgunned in any fight with the Russian army.

Wallace admitted to the parliamentary Defence Committee last June that a lack of deep-strike artillery was a big problem.

Now the Army is left scrambling to acquire an interim solution until a longer term answer can be found quickly.

“My main concern is our lack of deep fire. We are pretty much over-ranged in our heavy artillery by everyone. Our AS-90 range is about 23 or 24 kilometers. France and everyone else are in 55 kilometer ranges,” Wallace said.

Swedish, German, French, South Korean defense companies are among those who have previously expressed an interest in the Mobile Fires Platform program once the competition formally gets underway.

The deep-fires update is part of a wider modernization of British artillery and fires assets, including recapitalization of the M270 multiple launch rocket system (MLRS).

At least six of the Royal Artillery-operated M270 systems, similar to HIMARS, have been gifted to Ukraine.

Modern artillery isn’t the only capability in the spotlight this week.

Wallace went further in his Jan. 16 statement, outlining a substantial program of new weapon deliveries to the Ukrainian military.

The defense secretary also revealed that ministry officials are rethinking whether planned tank force cuts announced in 2021 were still credible.

“Even as we gift Challenger 2 tanks, I shall, at the same time, be reviewing the number of Challenger 3 conversions to consider whether the lessons of Ukraine suggest that we need a larger tank fleet,” Wallace said.

MoD officials told the Defence Committee last week they were “uncomfortable” with some capability gaps and were looking at what they could do to accelerate several programs.

Capability gaps in areas like ground-based air defense, weapon stockpiles, drones, deep fires and logistics were mentioned by the officials.

The British are currently in the early stages of substantially upgrading their Challenger 2 fleet to the Challenger 3 standard via a 2021 deal with Rheinmetall BAE Systems Land.

The integrated review of 2021, though, downgraded the importance of the main battle tank in modern warfare, mandating that the British Challenger 2 fleet would be cut to just 148 vehicles from the present level of 227 – minus the 14 tanks now destined for Ukraine.

The decision sparked controversy with analysts and lawmakers who argued that that such a small number of vehicles meant Britain was effectively giving up on having a viable main battle tank force.

The Challenger 3 upgrade will breath new life into a vehicle that has been neglected by the British in terms of upgrades since it entered service in the late 1990s.

The most visible modification on the Challenger 3 will be the introduction of a 120-millimeter smoothbore gun replacing the Challenger 2′s unique, rifled weapon.

Defense procurement chief Alex Chalk told lawmakers last week that the first 18 Challenger 3s would be handed over by the Rheinmetall/BAE joint venture in 2027. Full operating capability is scheduled for 2030, he said.

Fourteen British main battle tanks for Ukraine by themselves may not change the battlefield balance much, but they send a political signal to allies prevaricating over doing something similar.

Poland and Finland have said they will donate German-built Leopard 2 tanks, but the transfers are subject to the approval of the German government.

Britain’s tanks should not be seen in isolation but as part of a broader Western capability package, according to Wallace.

“The Challengers should be viewed alongside the 50 Bradleys from the United States. Those are effectively the ingredients for a battlegroup with divisional level fires of either AS-90s or other 155mm howitzers. The 14 tanks represent a squadron, and the 50 Bradleys would roughly form an armored infantry battlegroup,” Wallace told lawmakers.

Andrew Chuter is the United Kingdom correspondent for Defense News.