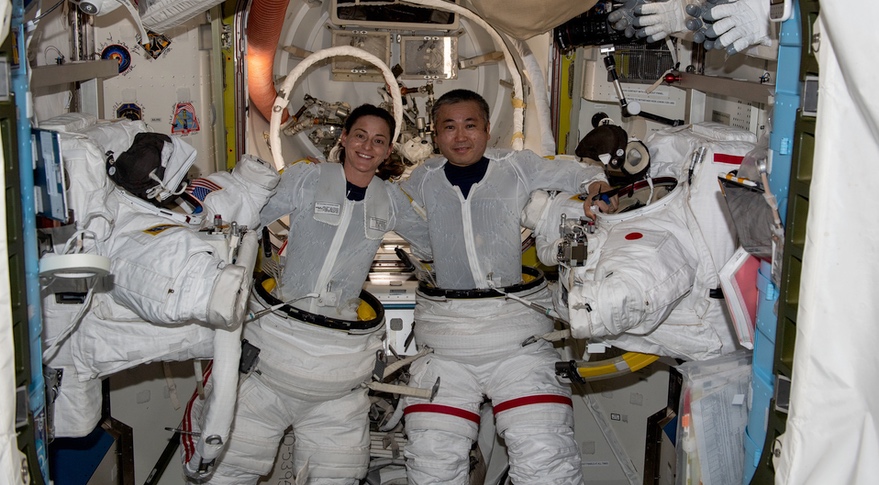 WASHINGTON — It is largely business as usual on the International Space Station as NASA adapts its current activities and future plans to Russia’s decision to replace a damaged Soyuz spacecraft docked there.

NASA astronaut Nicole Mann and JAXA astronaut Koichi Wakata will conduct a spacewalk Jan. 20 to install a mounting bracket for a new solar array that will be delivered to the station on a future cargo mission. The spacewalk, the first by either astronaut, is scheduled to last six and a half to seven hours.

The spacewalk is a sign that activities on the space station are continuing largely unaffected by the damage sustained by the Soyuz MS-22 spacecraft docked there Dec. 14 that Roscosmos and NASA have attributed to a micrometeoroid hit. The incident damaged a spacecraft radiator and caused a coolant leak.

The two agencies announced Jan. 11 that they concluded the spacecraft could not safely return to Earth its three-person crew of Roscosmos cosmonauts Sergey Prokopyev and Dmitri Petelin and NASA astronaut Frank Rubio. Instead, a new Soyuz spacecraft, Soyuz MS-23, will be sent to the station without a crew to replace Soyuz MS-22, which will return to Earth, also uncrewed.

On Jan. 18, astronauts moved Rubio’s custom-fitted seat liner from Soyuz MS-22 to the Crew Dragon spacecraft docked to the station. In the event of an emergency that required the crew to evacuate, Rubio would return on the Crew Dragon while Prokopyev and Petelin left on Soyuz MS-22.

“We think that will take out some of the heat load that’s in the Soyuz spacecraft and will help the overall posture for us,” Dina Contella, operations integration manager for the ISS program at NASA, during an Jan. 17 briefing about the upcoming spacewalk.

That move of Rubio’s seat into the Crew Dragon is only a temporary measure. After Soyuz MS-23 arrives at the station, his seat liner, along with those for Prokopyev and Petelin, will be transferred into Soyuz MS-23. Soyuz MS-23 is scheduled to launch Feb. 20, docking with the station two days later.

The launch of Soyuz MS-23 will delay slightly the Crew-6 Crew Dragon launch. At a Jan. 11 briefing, NASA said it would take up to a couple weeks to revise the schedule for both that mission and other flights to the station in the near future. Contella said at the spacewalk briefing that Crew-6 was scheduled to launch in mid to late February, with the Crew-5 Crew Dragon returning a few days later.

The Crew-6 mission includes astronaut Sultan Alneyadi from the United Arab Emirates. The UAE’s Mohammed Bin Rashid Space Centre announced Jan. 19 that the Crew-6 mission was scheduled for launch no earlier than Feb. 26, about a week later than previously planned.

Contella said that Crew-6 will be followed by a cargo Dragon mission, CRS-27, in March. That will in turn be followed by a Cygnus cargo spacecraft, NG-19, although she did not state when it would launch. NG-19 will be the last Cygnus spacecraft to launch on the current version of the Antares rocket as Northrop Grumman works with Firefly Aerospace on a new first stage of the vehicle.

The decision to replace Soyuz MS-22 with Soyuz MS-23 means that Prokopyev, Petelin and Rubio will extend their stay on the ISS. The three originally were scheduled to return to Earth in March but will stay up to six more months. Contella said they will likely return in late September, about a year after arriving. “We’re looking at the exact timing of that, but at this point, that would be when the vehicle would be planned to come home.”

The Soyuz coolant leak took place as Prokopyev and Petelin were preparing for a spacewalk, which was called off as a result and has not yet been rescheduled. “Our Russian colleagues are working on their forward plans for spacewalks at this point,” she said.