With the market’s rally appearing to have stalled a bit, the price of Terra Classic (LUNC) has also dropped back into the $0.00017 region. However, what are the chances of a rally to $1 at this time? 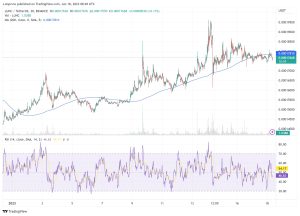 Although LUNC’s moving average convergence divergence (MACD) shows a negative value, giving off a sell signal, the coin’s relative strength index (RSI) of 43.57 shows that it is not overbought yet. Investors would want to watch its price movements to see how well it can perform and reclaim some of those MA indicators going forward.

LUNC has thus far managed to move in tandem with the market, with the asset’s profile still rising even after last year’s collapse of the Terra stablecoin ecosystem. The Terra Classic community has continued pushing one update after another, with many believing that the ecosystem can be revived and LUNC’s price can still surge.

One of those upgrades has focused on finding the right burn mechanism for LUNC tokens, which is expected to help reduce the asset’s circulating supply.

On Saturday, the network is expected to undergo another upgrade that will eliminate the reminting of a portion of burnt LUNC tokens. The upgrade passed after the community voted to pass governance proposal 11242. The proposal was released at the start of the month following the sharp drop in the on-chain burn rate for LUNC tokens in December, with community memes hoping to stop the reminting process and maintain a stable burn schedule.

After passing with over 66%, the proposal is now set to be implemented this Saturday. And Binance, the world’s largest cryptocurrency exchange with over 50% of the LUNC trading volume, confirmed that it would also support the upgrade.

The Terra Classic community hopes that this will finally implement a proper burn schedule and stabilize the LUNC supply in the long run.

At this point, it is unclear whether the price of LUNC will be able to reclaim $1 this year. However, value-seeking investors can still purchase several new coins for gains.

The Meta Masters Guild describes itself as the world’s first Web3 gaming collective. The Guild is looking to create a universe of games where developers can come in and launch games that will all function independently.

All games will use the Meta Masters Guild token ($MEMAG) in this new ecosystem. All MMG-created games will include in-game incentives known as “Gems” that can be exchanged for MEMAG tokens. Players can then redeem or reinvest these tokens in various ways within the ecosystem.

The Guild already has one game, Meta Kart Races, in the works, with two more, NFT Raid and Meta Masters World, on the way. The goal is to acquire more games that will attract more players, thereby organically increasing the value of MEMAG.

The MEMAG token is one of the most promising presales in the market. Its first presale stage has been completed, with the token raising over $556,000.

The FGHT token is one of the most revolutionary coins available. It powers Fight Out – a move-to-earn platform that encourages people to get fit and exercise their bodies.

Fight Out offers a simple platform where users can log in, choose their fitness goals, and work towards them. It provides everything they require, from content to workout routines, and a tracking mechanism that allows users to track their progress. The more they progress, the more they earn.

We have just raised over $3M in our stage 1 presale! 🔥

⏰ Only 5 days left until the stage 2 price starts increasing! ⏰

FGHT allows users to pay for this service’s subscriptions and stake it for discounts and other perks. The token is available on presale at the moment, and it has so far raised over $3 million.